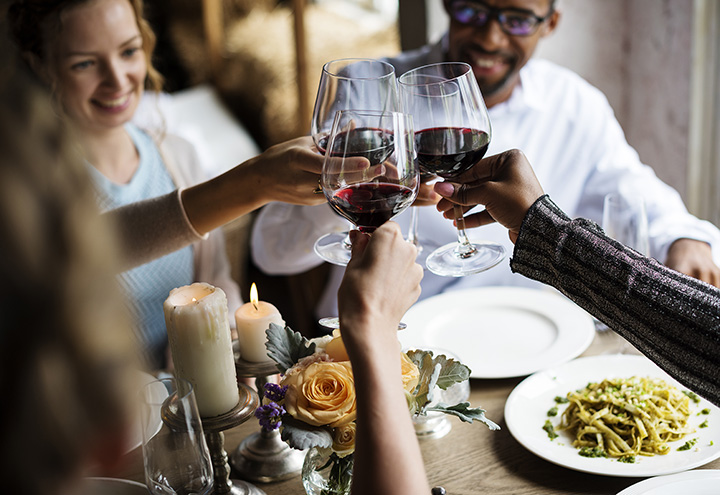 Dining out is a treat. Dining out in a place rich in history takes the experience to an entirely new level. From time-tested recipes to famous patrons of the past, Massachusetts is home to some of the oldest and most storied restaurants in America. Make a reservation and learn the lineage of our favorite historic restaurants in the state.

Not only is Union Oyster House of historical significance to Boston and to the Bay State, it’s the oldest restaurant in the entire country. The first meal was served in 1826 and Daniel Webster, prominent American orator and politician in the 1800s, was a frequent patron. Located on Boston’s Freedom Trail, it sits across the street from the Faneuil Hall Marketplace, and is known for its amazing seafood, steaks, chops and more.

Built in 1862, the Federal sits inside a stunning Greek Revival structure in Agawam. In 1936 it became the Federal Hill Club and was owned and operated by the Moretti family—the very same family that runs the restaurant today. White linen elegance is common practice here, but that doesn’t mean dining at the Federal isn’t affordable. Entrees run the gamut from $29 and up, with pizzas and sandwiches costing significantly less. Choose from steaks, pork tenderloin, salmon, spaghetti, and more.

Rye Tavern was first called the Cornish Tavern, and its history extends back to its inception, when the tavern was completed in 1792. It was initially a tavern and inn, run by husband and wife team Josiah and Abigail Clark Cornish. John Adams, second president of the United States, said of the tavern in 1794, “ I stopped one night at a tavern…about forty miles from Boston, and as I was cold and wet, I sat down at a good fire in the bar room to dry my great coat and saddle bags, till a fire could be made up in my chamber.” He goes on to mention the yeomen who entered the bar and started a lively conversation about politics, to which he became a silent listener. Rye Tavern looks much the same as it did in the 1800s. Cars go down Old Sandwich Road now, instead of horses. Good conversations still take place around the fire, and good pub fare is served.

History is alive and well at the Stage Coach Tavern at Race Brook Lodge. Built in the 17th century, wide plank floors and hand-hewn beams dazzle diners and lodge guests. Candlelight enhances the historical feel. Guests dine by the fireplace at dinner time, indulging in foods from local farms when available. Sunday brunch is a real treat, and gluten-free and vegan items available. Try the braised beef for a hearty, traditional New England meal.

Built in 1780, the Warren Tavern is named after Dr. Joseph Warren, a doctor and Harvard scholar who practiced medicine in Boston. Warren later became a Major General prior to the Battle of Bunker Hill. Dr. Warren is likely most famous for sending Paul Revere on his historical ride. Both George Washington and Paul Revere have graced the rooms inside the Warren Tavern. These days guests grace the rooms, dining on typical pub fare for lunch, dinner or brunch. Short Rib Shepherd’s Pie and Lobster Mac & Cheese are customer favorites.

The Tunnel Bar is a martini bar and eatery in Northampton with a unique architectural history. The stone and brickwork inside the building is original to its 1896 creation, when instead of a martini bar and eatery, it served as a tunnel for boarding trains. Enjoy charcuterie for two or truffle fries with your favorite martini when you visit.

Authentic New England dining abounds at the Historic Tap Room at Publick House, an historic inn built back in 1771 by Colonel Ebenezer Crafts. The inn served as a training ground during the American Revolution, and George Washington himself is said to have visited. Today it’s open for dining, weddings, overnights and more. Enjoy breakfast, lunch or dinner.

Captain Freeman Atkins built the Red Inn in 1805 as a gift to his wife, Emily Gross. The inn and restaurant actually sit on the spot where the pilgrims first landed aboard the Mayflower. It has, for decades, been known for its celebrity guests, including Norman Mailer, Isabella Rosselini, Farrah Fawcett and Ryan O’Neill. President Theodore Roosevelt and his wife stayed at the inn whenever they traveled to Provincetown. Today it serves award-winning cuisine along with views of Provincetown Harbor and the lighthouses of Long Point. Fresh lobster and lamb chops are just two of the popular entrees served.